Kep is a tiny coastal province in southern Cambodia, known for its seafood and tropical islands. The relaxed provincial capital of Kep, or Krong Kaeb, has wide streets with crumbling villas that recall its former glory as a French colonial resort town. Kep Beach has calm waters and a promenade with statues, while vendors line the waterfront at the nearby crab market.

Kep City is a municipality in Cambodia with the status of a province. Kep is just a few kilometres from the border with Vietnam located and used to be Cambodia's most popular beach town but has fallen on hard times in recent years (especially due to the Khmer Rouge). Many of Kep's, mostly French villas are abandoned, but some of the town's former splendour is still apparent.

The see is lined with huge sidewalks and some large statues that now seem largely out of place. The king built a palace overlooking the Gulf of Thailand, but it was never furnished and now sits empty. A good, paved road connects the small town with the 15km far away Kampot. The slightly darker beaches than in Sihanoukville are mostly scattered with mangroves and black rocks, but Koh Thonsay (Rabbit Island) is just a short boat ride away (approx. 1/2h).

Kep appears to be experiencing something of a renaissance, with several mid-range and luxury guesthouses and bungalows recently opened or still under construction. The seafood is cheap, plentiful and delicious - particularly the quite famous crabs. Kep is also home to an extensive national park covering some mountains with deep green jungle.

The French established Kep City during the colonial time in 1908. Today Kep is mainly popular to the domestic tourists, who choose Kep as their holiday destination. What's more, Kep offers great seafood and magnificent views of the mountains and the beaches.

Especially during the Sixties, during the time of Sang Kum Reas Ni Yum the city was developed as a beautiful seaside tourist resort for the rich and government. The story related to the name of Kep said that there was a king named Sa Kor Reach, who had a mighty spell. He put a sleeping spell on a commander at AngKor Thum, than stole the commander's white horse and fled together with his troop to the Southwestern seaside.

When he took a rest at the seaside, he was overhauled by the commander's troops, who chased him from behind. Suddenly, he got on the horseback; the horse reared, and made him fall down on the ground together with the saddle. Then, he got on the horseback again and fled away without picking up the saddle, because the commander's troops almost approached him. So that's why this area was called ' Kep Seh ' meaning ' the saddle ', nowadays it's only called ' Kep '.

Kep City municipality is 336 square kilometres big. It's located in the South of the country and is bordering to the North, East and West with Kampot and to the South with the Gulf of Thailand. The province has not so much typical plain wet area like other provinces of Cambodia, as there are some foothills from the Elephant Mountains coming from Kampot province. You can see not so sparse grey limestone hills akin to the Vietnamese ones. Nevertheless there are areas covered with rice fields and other agricultural plantations.

Beside the profitable fruit cropping such as durian, mango or coconut Kampot Pepper, which is also grown in Kep, has been renowned for decades as one of the best peppers in the world. This pepper has a very distinct flavour and smell, especially when its fresh harvested.

It develops an enthralling aroma, strong, delicate and aromatic. Therefore it is famous in the world and exported to many countries. Kep also tries more and more to focus on the tourist sector, as there is quite a lot of interest by local people and by foreigners, who still can discover Kep and it?s rural countryside as a very natural, remote and docile place being situated on the beautiful costal line of Cambodia. 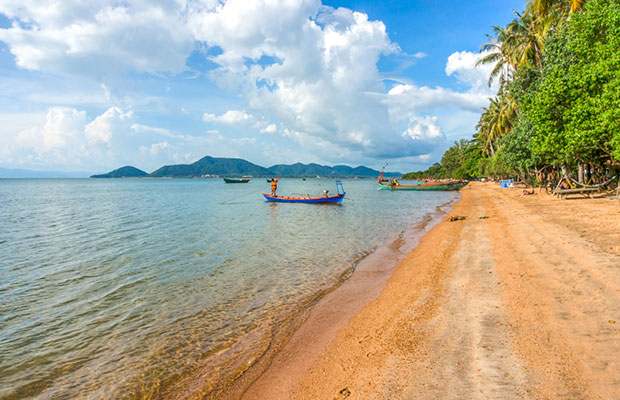 Koh Ton Say is the natural resort locating at the Southeast of Kep town in 4.5-kilometer distance from the town, and has two beaches suitable for swimming because they have white sand and shallow ... 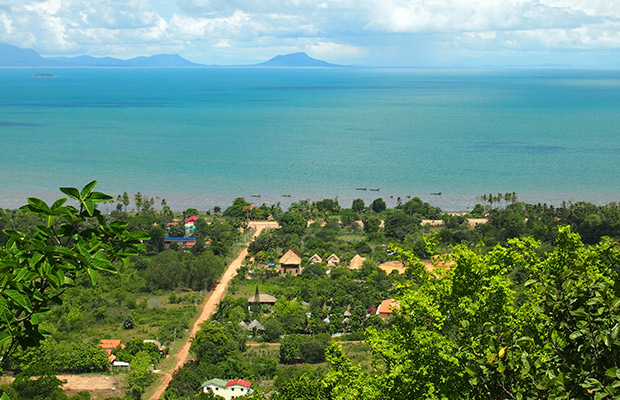 Kep National Park is a national park of Cambodia in the Kep region of Cambodia. Established in 1993, it covers an area of 50 km². The nearest town lies at Krong Kaeb. The Led Zep Cafe offers ... 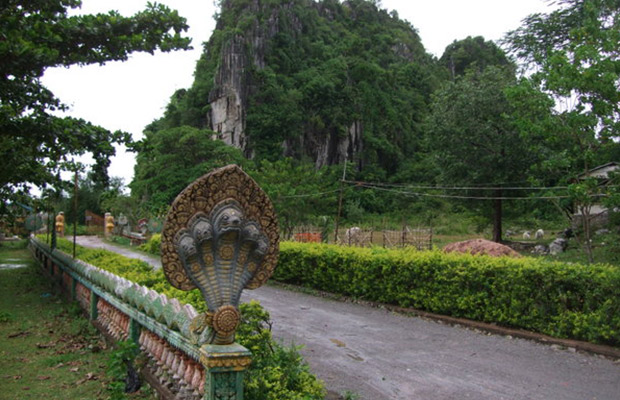 This Buddhist temple sits at the foot of Phnom Kompong Trach, a dramatic karst formation riddled with more than 100 caverns and passageways. From the wat, an underground passage leads to a ... 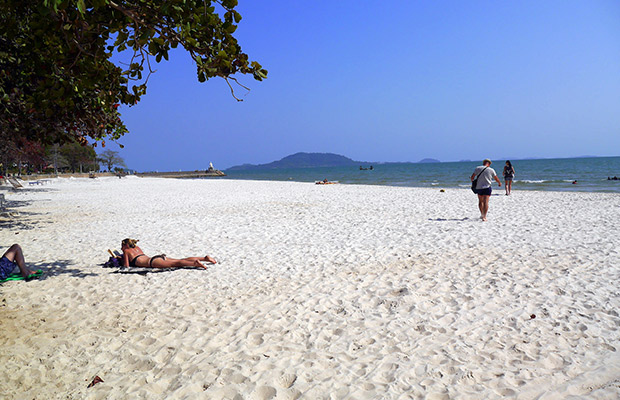 A single, kilometer long crescent of sand near the tip of the Kep peninsula. Dining platforms and seafood vendors line the road behind the beach. Busy on weekends but often deserted during the week. ... 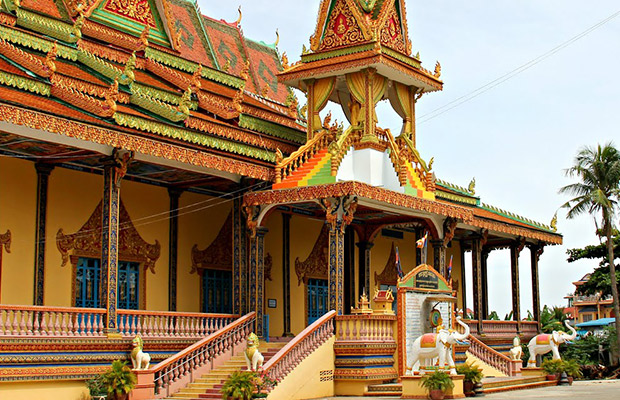 This very modest Buddhist temple sits at the beginning of a trailhead into Kep National Park that leads past some small pagodas, a nunnery and onto the sunset rock ... 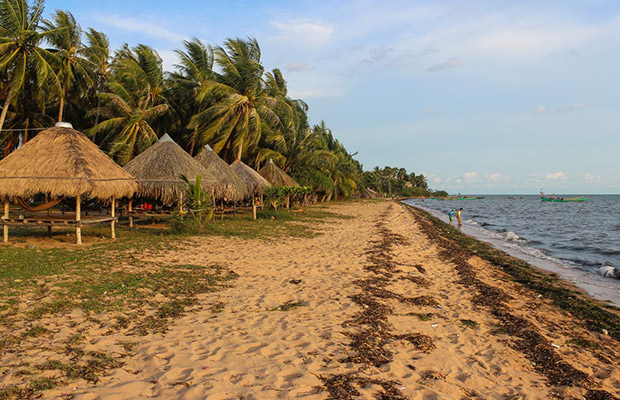 This 'beach' has dining platforms and food shacks, but not really any sand as such. It begins a few hundred metres southeast of Kep Beach, just past the town's famous giant crab ... 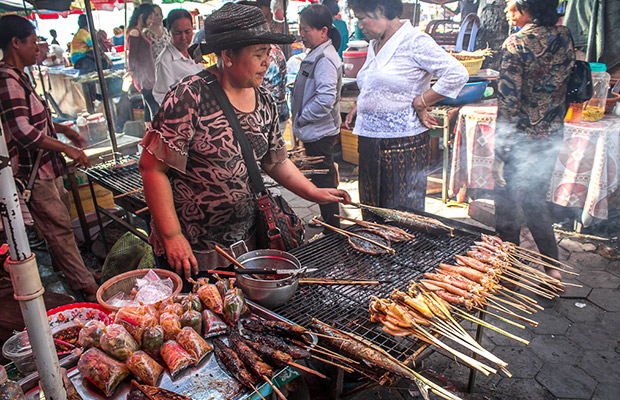 Hanging out in Kep’s crab market is one of our favourite things to do in Cambodia, but eating crab is becoming increasingly controversial. Over-fishing of the crabs is decimating stocks and ... 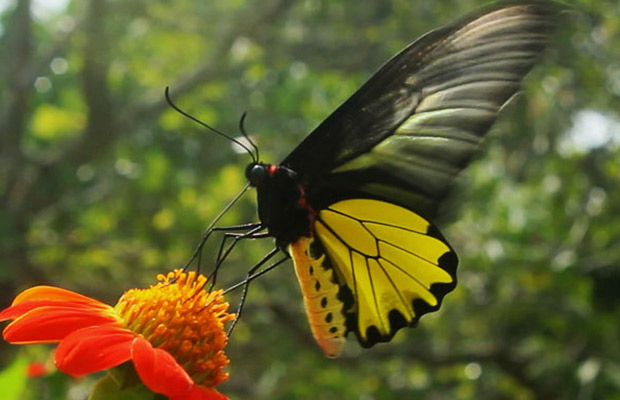 This small and beautifully kept flower-filled garden is home to myriad butterflies. You can cycle or motorbike here or hike here from the Kep National Park trail by taking the off-shooting ...

Sitting atop a hill overlooking Kep, this tranquil wat has gorgeous views over the coast. You can take the off-shooting 'Samathi Path' from Kep National Park's main trail to get ...